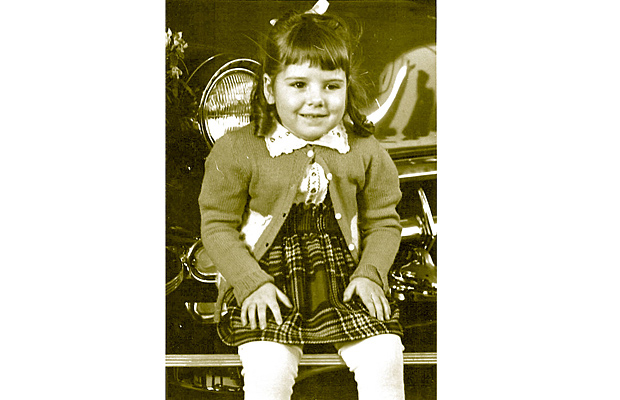 By Roxanne Hooper.
Brenda Alberts as a youngster, had her picture taken sitting on the bumper of her Grandma Vincent’s car. She now shares her grandmother’s butter tart recipe with all.
Brenda Alberts, owner of Birthplace of B.C. Gallery in Fort Langley, hunted through her attic in search of a photograph.
She had hoped to find an image of her and her late mother, but was equally thrilled to discover a picture of herself, at about age two, sitting on the bumper of her Grandma Vincent’s car.
It was this woman who first introduced Brenda to an all-time favourite butter tart recipe she still whips up every Christmas.
“She passed away when I was five, but her butter tarts live on,” Alberts said. “When I was a little girl growing up in Northern Ontario, Christmas was a time that special gifts were handmade and special recipes were baked,” she recounted.
“This particular recipe is from my Grandma Vincent, which dates back to the 1920s and which was passed onto my mom and onto me,” Alberts added, noting that she lost her grandmother when she was five, and more recently her own mother in 1986, but keeps this family tradition alive in their absence.
“She would be pleased that I pass on our special recipe,” Alberts said, sharing fond memories of baking the tarts with her mother. “I used to stand on a chair and help roll the dough; a special glass was used to make the right size for the tart. It was a special time that was just my mom and I, and this fond memory I pass on to you.”
GRANDMA VINCENT’S BUTTER TARTS
Ingredients:
. Pastry
5 cups flour
4 tsp. brown sugar
½ tsp. baking powder
1 tsp. salt
1 lb. lard
. Filling
½ cup flour
½ cup brown sugar
2 eggs
4 tbsp. Carnation milk
Raisins or pecans
Put an egg in a cup and fill with milk
Mix all pastry ingredients together and roll out, cut into circles to line tart pans. Mix together remaining ingredients, and fill tart shells. Bake 350ºF approximately 30 minutes until pastry is golden and filling is set. This pastry can be used for other pies, tarts or quiches. – Brenda Alberts, Birthplace of B.C. Gallery.